The Island’s leading Marketing Agency – Orange Media Group has shown its support for Youth and Academic excellence by providing the prizes to the top performing students of the Castries Comprehensive Secondary School for 2013.

These prizes include a scholarship bursary and trophies for a host of different achievements.

At the CCSS Graduation Ceremony held in recently, Brittany Henry captured the Orange Media Group President’s Award for Excellence – The Student of the. Brittany was also the Valedictorian of the CCSS Class of 2013. She received a Special French Award and was also named Most Dedicated Student. The Governor General Dame Pearlette Louisy presented the award.

Brittany was the School’s Head Prefect, served as a Youth Parliamentarian, was involved in Poetry, Cheerleading and Public Speaking (Debating), was a member of the School Choir and was also Miss Cardinals 2012 – an annual pageant held by CCSS.

For the President of the Orange Media Group, Earny St. Catherine, Brittany’s Awards hold special significance. Mr St.Catherine is recognised as a leader in the field of Marketing and Communications in the OECS and was one of the country’s youngest ever journalists and news anchors. As a past student of CCSS, he too was an outstanding student and Valedictorian for his year 1989; was the President of the Student’s Council and won numerous regional and international competitions for French and Literature; was the island’s top Junior Debater and was also actively involved in Sports. St. Catherine said: “I am very proud of Brittany’s achievements which remind me so much of my graduation year at CCSS. As my Alma Mater, CCSS will always have a special place in my heart for it was there that I developed a thirst for excellence. This commitment to CCSS is indicative of my and Orange Media’s deep commitment to the development of young persons who show present excellence and also potential to be truly outstanding in life and not only academically.”

A very elated Brittany said: “I would like to express my heartfelt gratitude to Mr. St. Catherine because I have prayed a lot to especially get the Student of the Year award and getting it, tears are running down my cheeks. I am very grateful to have gotten this award and to be sponsored by Orange Media because now I can find out more about this company and probably become an entrepreneur myself to do something like he is doing to encourage students to create a business and to finance other students or to sponsor awards and just do something motivating just as he did; so I really congratulate him for helping me make my dreams come true.”

Chad Goolaman also received the Orange Media Award for Contribution to School Life. He was named Most Disciplined Male and captured the Principal’s Award. Commenting on his award, Chad said: “Contribution to school life comes in handy because you find that students who are awarded this prize are students who are very active in school. Getting this award from Orange Media Group is an honour. I want to thank them immensely for this award because it shows me that I have been awarded for my hard work at CCSS. I am greatly impressed by this award. I believe that this company is doing a very good job in sponsoring students; it shows that they are seeing what the youth are doing and this helps.”

CCSS Principal, Ms. Daniel said: Everyone knows that resources are scarce. When individuals like Mr. St. Catherine, not just Orange Media Group, but Mr. St. Catherine himself has always been foremost in his attempts to assist Castries Comprehensive. He comes forward even when he is not asked and is very willing to assist because he is also a past student and surprisingly this year the Student of the Year, Brittany Henry and Mr. St. Catherine have so much in common. Mr. St. Catherine was also a top student in his time and both he and Brittany seem to enjoy the arts and they have both been very involved in school life and if such an award were available in his time he would have been the recipient of that award.

The awards given by the Orange Media include:
The Best French Prize
Business Education Department Award
Contribution to School Life Award
Student of the Year 2013 Award

The Orange Media Group Inc has provided a bursary for Brittany to cover her regular school fees, uniforms, books, transportation and a laptop for her first year at Sir Arthur Lewis Community College.

Orange Media Group is the leading Marketing and Advertising Agency in the OECS. The Agency has over the past 20 years been conceptualising and executing marketing and communications campaigns for high-profile clients in Telecommunications, Insurance, Banking and Retail. Orange Media maintained a presence, gathered market intelligence and developed working relationships with the public and private sector and community leaders in the respective islands. Some of its clients include: ECFH/Bank of Saint Lucia; British Airways; Winfresh; Antigua Commercial Bank and Lime. 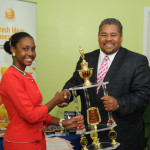